The Wolf is sworn to protect his young lord.

A distilled description of Sekiro Shadows Die Twice would go something like this: It’s Dark Souls but faster. In all fairness, it’s not that far off. Sekiro takes the hack-and-slash gameplay of Dark Souls and Demon Souls but adds a little zest to its pacing. Movements and actions are certainly quicker than the plodding, weighted actions of the Souls games. Sekiro’s grappling hook also adds verticality to the combat, adding another layer of depth to the navigation and combat.

Another change: Sekiro has two lives so it’s only game over after you’ve died twice. Fans of previous From Software games were worried that this might make Sekiro Shadows Die Twice a less challenging adventure. To make up for this, From Software has incorporated a balancing mechanism where frequent deaths inflict permanent debuffs to Sekiro that affect his vitals, such as total health. If you’re coming into Sekiro worried it will be too easy, rest assured that’s definitely not the case.

Sekiro follows a bodyguard shinobi known as the Wolf, retainer to a young lord. The story begins with your clan’s fortress under siege and the Wolf hurrying to rescue his master. He is confronted by a legendary samurai who bests him in battle and steals away his lord. The rest of the game takes you across feudal Japan in search of the young lord.

The grappling hook adds another dimension to combat and navigation.

Of course, saving his master and getting revenge on the samurai that defeated him is no easy feat. Sekiro is brought to you by From Software, the team that brought us the ultra-hard Dark Souls and Demon Souls. It offers a fresh twist on the Souls recipe, doing away with the RPG-like equipment systems in favor of special attachments that offer unique advantages in battle. Passive stat bonuses – other than the occasional health upgrade – are no longer a factor; you either get better at Sekiro or you stop progressing.

As mentioned earlier, the Souls games serve as the foundation for Sekiro Shadows Die Twice. Combat has a quicker pace; dodges, jumps, and rolls are executed more swiftly, and movement, in general, is much lighter. There’s also a soft stealth mechanic present in the game; stealth kills take down foes in one hit. Fans of old ninja stealth games like Shinobodo and particularly Tenchu should find a lot of things to like about Sekiro.

As the name implies, the Wolf has two lives, but so do bosses. Luckily, stealth attacks work on mini-bosses as well, and advanced players can reduce them down to a single life with some careful maneuvering. It’s an interesting twist; your power is also that of your strongest foes. It also means bosses must be defeated twice, a brilliant balancing mechanism that ensures the game is still as hard as its predecessors.

Having two lives doesn’t mean the combat is any easier.

This higher tempo in battles also means combat is more attack-centric overall. Unlike in Souls games or Bloodborne, sitting back and whittling down a boss’s health rarely works. Holding the parry button only invites combos from foes. Get hit by enough and your defense breaks, leaving you open to deadly attacks that can end your run. It’s a refreshing change to the Souls formula requiring a completely different mindset for success.

The severely punishing combat in Sekiro means this isn’t a game for the lazy gamer. Even Souls veterans will need some time to become accustomed to the higher tempo action. That extra speed means success is more reliant on twitch reflexes than even the Souls games. Fortunately, there’s always room for learning, and that’s where these types of games are most satisfying. The more time you invest in Sekiro, the greater the payoff. Progressing in the game rewards you with new items skills, but none of them guarantee success. No, the only way to beat Sekiro is to actually get better at Sekiro, and that’s a refreshing truth. 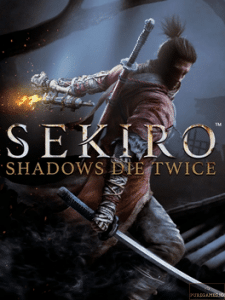 Sekiro offers a unique twist on the Souls formula, upping the overall tempo of combat and incorporating verticality into the mix. It's also just as hard as its predecessors, so if you're a fan of other From Software titles then Sekiro should be right up your alley.