Doraemon Story of Seasons is a delightful life sim that seamlessly blends two iconic names into a fun, cohesive product.

Doraemon Story of Seasons features an endearing cast of characters.

Doraemon Story of Seasons is a unique marriage of two super popular Japanese properties. Doraemon is one of the longest-running manga and anime that currently airs. The character, a helpful blue robot who appears part bear and part mouse, has been a staple of Japanese pop culture for decades. Story of Seasons is the creation of famed game designer Yasuhiro Wada, best-known for his iconic Harvest Moon farm simulators.

Doraemon Story of Seasons begins with the cartoon’s main character, Nobita (Noby in the English translation), struggling to come up with an idea for his summer project. After his mother forces Noby out of the house to search for inspiration, he comes across a mysterious seed in the alleyway near his home. Noby, Doraemon, and a few of their closest friends plant the seed, which quickly sprouts into a gigantic glowing tree. A violent storm suddenly appears, lifting the magical tree and our heroes into a portal that transports them to another dimension.

A more casual take on the classic farming sim formula.

The central mechanics of the game should be familiar to those who have played other Wada games, like previous titles in the Story of Seasons franchise or the more well-known Harvest Moon. After a short introduction to the new dimension (where, the characters are appalled to learn, child labor is mandatory) the player gains control of Noby and, like in other Wada games, is given free reign to explore the farm and the areas surrounding it.

There is a myriad of interesting activities to do. Of course, planting and harvest crops is present in Doraemon Story of Seasons, but you can also raise cattle, fish, cook, and dive into the local mine in search of valuable minerals to sell. There are also quests to complete and special calendar events (like festivals) so there’s always something exciting to do.

Doraemon is a property that targets a specific audience, young children, and so some concessions have been made with regards to game difficulty to allow for younger players to enjoy their time in the game. For example, crops grow much more quickly than they typically would in similar games, and most buildings can be accessed any time of day, unlike other life sims that have stricter limits based on time and current day of the week. Seasoned farm sim players might find the lack of challenge a bit boring, but they’re not the primary demographic for this title.

Some quality of life changes have also been introduced, such as the ability to transport to anywhere in the map using Doraemon’s “Door to Anywhere”. It cuts down on travel time by quite a bit, giving the game a quicker pace and reducing the tedium of travel that hurts other life simulators. It’s refreshing to play a life sim that doesn’t require long hikes through multiple transition screens, but a fair bit of urgency is lost when you no longer have to worry about time.

It should be noted that marriage has been entirely removed from the game for obvious reasons. You can still foster relationships with other characters and earn rewards from them, but there’s no denying that a key aspect of this genre of games is missing.

Visually, this game looks like a moving watercolor painting.

The art styles of both Doraemon and Story of Seasons go together well. Visually, Doraemon Story of Seasons plays like a moving watercolor painting. With the camera zoomed out, borders slightly bleed into one another – much like watercolor paints would. It’s meant to be a light-hearted, relaxing game, and the warm color palette and delightfully folksy art direction hits that tone perfectly. 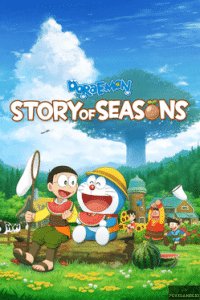 Designed for more casual play, Doraemon Story of Seasons does away with key features of the life sim genre by reducing the importance of time management and incorporating fast travel. It's still a fantastic life sim, regardless, and the delightful visuals and charming characters make your time in the world of Doraemon a joy.