Disco Elysium is a hardboiled detective procedural with a CRPG aesthetic.

Disco Elysium opens to a supremely unflattering shot of your detective laid flat on a dirty rug with nothing on but a pair of dirty drawers. He awakes from a drink-induced blackout with no recollection of the events leading up to his unfortunate circumstances. Disco Elysium is a filthy cop drama set in a grimy, filthy world of cutthroats and thugs. In your hungover state, you must deal with a new partner and discover the details behind a gruesome lynching all while trying to recall fragments of 0the missing memories from the night before.

All the standard dressings of those old ’90’s PC RPGs are there – quests and parties, leveling up and skill checks. The interface, too, should be instantly familiar to fans of that classic era of role-playing games. But Disco Elysium is a game that revolves around its dialog, and so your interactions are as long, meandering text adventures built on a complex branching conversation system. More than anything, Disco Elysium is here to tell you a story, and for this, it often feels like something straight out of the catalog of golden age Sierra Games.

As we said, Disco Elysium merges hardboiled detective drama with tabletop RPG gameplay, but there’s little doubt that this is a drama first and foremost. In fact, everything is performed via the text box. Despite its classic RPG trappings – the 3/4 isometric camera angle and shocking neon Fallout-esque visuals – combat takes place entirely in the realm of skill checks and the text box. It’s an interesting choice; this equalizes the verbal duels that comprise conversation with your physical battles. The narrative does the same, frequently steering you towards non-violent resolutions to conflicts.

The dialog system in Disco Elysium is surprisingly deep. Each choice affects your character’s personality and how people respond to you.

And we can’t get enough of this dialog system. It feels impossibly complex, each action you do and choice you make somehow affecting anything and everything about you and around you. The freedom of choice in Disco Elysium is immense. There’s a multitude of ways to respond to a question, each decision you make gradually building your reputation and personality. This affects how the NPCs respond to you, how they react when they first see you, and even the potential outcomes of quests. Branching quest and dialog systems are hardly new technology, but it feels new in Disco Elysium.

Despite its generic premise, Disco Elysium’s unique systems make it a one-of-a-kind experience. On the whole, it’s a sad story comprised of a series of compact sad stories. Throughout your journey, you meet an eclectic cast of eccentric characters, shady gangsters, shameful cowards, and straight-up kooks. The only disappointment is how little variation there is in the story itself in spite of your ability to influence everything else outside of it.

This screen should be a familiar one to RPG fans.

Disco Elysium, like all great RPGs, is a game meant to be played through again and again. The wonderfully complicated dialog system guarantees multiple unique runs. It’s the first game we’ve played in a long while where your tiniest of actions can have real consequences on the world around you. Every choice you make not only affects how people respond to you, but they also develop who your character is. It’s perhaps not as action-packed as we initially expected – at least, not the kind of action we were looking for – but it’s a sublime game nonetheless 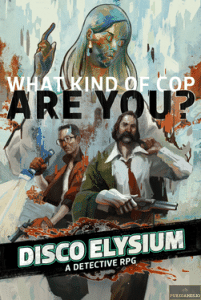 Disco Elysium is worthy of all comparisons to the great RPG games of old. Modern isometric RPGs are a rare beast, but even rarer still is the RPG of this quality. Players who appreciate a game with freedom and depth built atop a powerful narrative foundation should check Disco Elysium out.