Age of Wonders Planetfall is a one-of-a-kind grand strategy experience.

Age of Wonders Planetfall offers a unique fusion of Civilization-style empire-building and a battle system reminiscent of X-Com. This should be a very interesting concept to fans of the 4X genre.

Before we get into the battle system, we should talk a bit about the game modes you’ll find in Age of Wonders Planetfall. Of course, there’s a Campaign mode with 13 total playable campaigns. Each race has their own campaign consisting of multiple missions. There are 6 factions in the game and each faction thas their own unique specialties. You can also choose a Secret Technology for your faction that fits with your personal playstyle.

There’s also a Scenarios mode where you can face off against up to 11 other opponents. A unique fact about the multiplayer mode in Age of Wonders Planetfall: you can play your turn even if other players aren’t currently online. Victory conditions are similar to those in Civilization; you can win by destroying all foes or through diplomacy.

The turn-based combat takes place in a separate screen.

The map in Age of Wonders Planetfall isn’t far off from the one in Civilization (you’ll notice there are a lot of parallels to Civilization). It’s divided into multiple sectors; each sector can be exploited for resources and you can take control of sectors adjacent to your settlement. Fights most frequently break out over control of sectors in this game, as they not only offer valuable resources but they also take away a part of the map from your enemies.

You can send out units to explore the map or find resources that you can use to build up your nation. The borders of your settlement expand as your population increases. If you encounter another faction, you can choose which diplomatic path you want to take. Will you choose peace, raise arms, or ignore them entirely?

There are NPC factions as well, small nations or settlements that can be conquered or traded with. You can by new units or technology from these factions depending on how good your relationship is with them.

There are 6 different factions to choose from.

The game has special and unique units that are more powerful than the rest called Hero units. Hero units have skills that can turn the tide of battle. They can also be upgraded. And the upgradeable abilities are sure to leave some players dazed with the sheer choice of cool abilities you can try.

An awesome new feature in Age of Wonders Planetfall is the ability to modify units. Yup, we can customize our soldiers now. Special items earned from quests, exploration, or technology research can be used to upgrade the soldiers under your command. Upgraded units have higher maintenance costs – an important consideration when deciding which units to upgrade and when.

As we explained earlier, the combat in Age of Wonders Planetfall bears more than a passing resemblance to X-Com. When you meet an enemy unit in the world map, you can choose to resolve battles automatically or take direct control of your units. The game then switches to a fully-3D battle map complete with an interface that just screams X-Com. You have the option to take full cover, run, go into overwatch – an X-Com term where your unit stays in place but attacks enemy units that moving during their turn – and so on.

Those familiar with the X-Com combat system will feel right at home and enjoy the battles in Age of Wonders Planetfall. There aren’t as many units on-screen as in X-Com; a conscious decision perhaps to reduce the amount of time it takes to complete battles. The landscapes of the battlefield are also varying, with fights taking place in open fields or broken urban settings. These different terrains offer varying levels of cover and require specific tactics to best take advantage of. Certain units also fare better in certain terrain than in others. 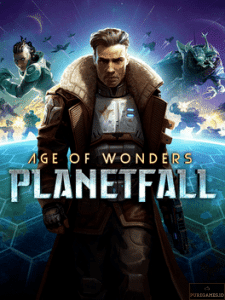 Age of Wonders Planetfall is a delightful mix of 4X empire-building and turn-based tactical combat. The diplomacy options and complex technology trees make this a game with something for everyone. Fans of grand strategy games should definitely give this one a whirl.