Felix the Reaper is an endlessly charming 3D puzzle game with a delightful mix of romance and dark humor.

Felix the Reaper is a sublime and challenging puzzle game.

Felix the Reaper is – you guessed it – a grim reaper, but he’s, frankly, not a very good one. He’s endearingly awkward and prone to spontaneous bouts of free dancing. He’s also enraptured by the beautiful Betty the Maiden, an employee at the Ministry of Life, and he would like nothing more than to kindle a lasting relationship with her.

But, as our narrator explains, their love is not meant to be. She loves life and he’s a soul collector who deals in death. But even their seemingly insurmountable differences won’t deter our innocent hero from his one true love. And so Felix, with his hopes in heart, dances his way across the mortal realm to complete his grim tasks, wishing that his and Betty’s paths might one day cross.

Felix the Reaper is a 3D puzzle game for PC, PS4, XBox, and Switch that revolves around setting up deaths. Felix does this by arranging objects so that each scene ends with the demise of its target character. Felix might, for example, pour oil across a road to cause a vehicle to skid into his unsuspecting victim. The catch? Felix is a reaper and thus can only move through shadows. Fortunately, he has the ability to manipulate the position of the sun, altering how shadows are cast and transforming the stage around him. It’s a fascinating premise and one that relies on the player figuring out the underlying logic for interactions in each stage.

Felix is infatuated with the curvaceous Betty.

There’s a lot to like about the style and tone of Felix the Reaper. Background information delves lightly into religion and the role of Grim Reapers throughout history. The cutscenes that bookend each stage are also wonderfully animated and often hilarious, depicting Felix’s innocent victims going about their lives and the moments leading up to their unfortunate deaths (by Felix’s hand). Its humor is also delightfully dark; the tutorial guides you through the steps towards your first killing only for Felix to learn that he’s offed the wrong bloke.

Our primary issue with Felix the Reaper is how convoluted some of its puzzles can get, particularly in the later stages. New mechanics and objects are introduced in each stage which, yes, presents new, interesting situations to exploit. However, as mentioned above, the lack of proper explanation of how these new mechanics work unfortunately leads to a lot of pointless testing and retesting; too much time is wasted trying to figure out how the stages work and not enough on actually solving them.

Felix ends each stage with a dance party.

The later levels also suffer from poor readability. It can be difficult to discern which stage assets are and aren’t navigable – is that just some damaged-looking terrain or is it an insurmountable hole? The camera feels floaty and inaccurate, too, which is maddening in those moments when careful placement can mean the difference between a correct solution and a retry. Accidental item placements are too common in Felix the Reaper, and the undo button, rather annoyingly, takes you all the way back to the last checkpoint.

These issues aside, the challenges remain a joy to solve, posing enough of a challenge that discovering the solutions is immensely gratifying. Completing a stage unlocks its Hardcore version which not only disables hints but also conceals the level goal from you. There are also collectables and skulls, essentially a rating you get for fulfilling certain conditions in a stage, that then unlock even more challenges and Time Trials. If you’re looking for a challenging puzzle game that will keep your occupied, this is the game. The numerous challenges will have you playing for a long time. 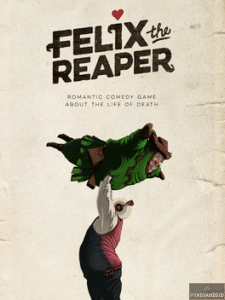 Felix the Reaper is an outstanding 3D puzzle game despite its flaws. It's charming, stylish, and deliciously dark, with rewarding gameplay that provides a sufficiently satisfying challenge.