Telling Lies revisits the FMV-based sleuth gameplay of Her Story to tell a brilliant detective’s tale.

The acting in Telling Lies is superb.

Telling Lies is another adventure detective game from Sam Barlow, the creator of the surprise hit Her Story, and it builds on the same general concept to great success. Just like in Her Story, the entirety of Telling Lies is experienced through the player character’s computer screen. Unlike in Her Story, which was set in the mid-’90s and therefore adopted an appropriately retro aesthetic for that era, Telling Lies uses a more familiar, modern interface. In both games, you find yourself typing in keywords into a database to find clues that lead to new videos that may, hopefully, lead to further clues. Admittedly, that doesn’t sound like a very compelling gameplay loop, but in practice, it’s a thrilling experience that is wonderfully sold by some excellent performances and an engrossing story.

In Telling Lies, you’re tasked with examining footage of four unrelated people who are brought together by a single great lie. Expanding upon the single interviewee, single set premise of Her Story, Telling Lies is set in a variety of different locations with a significant supporting cast. It feels like the natural follow-up to Her Story, as if its full potential is much nearer to realization after having been freed of its restrictive budget. The characters aren’t retelling an event in the past, but these things happen to the people right in front of you. The intimate lighting and close camera angles make the videos often disturbingly intimate as if we’re watching something made for someone else because, well, in the context of the story that’s precisely what they are. It’s frankly a bit uncomfortable.

Much like Her Story, Telling Lies is played by inputting keywords into a computer screen.

Fitting to its title, the four main characters whose lives you follow like some sort of righteous stalker are all lying about something. In many cases, you can tell who they’re lying to, but other times it’s not as obvious, but your ability to deduce important assumptions like this improves as you play. You learn to subtly pick up on what thing in their lives a non-descript “it” or “they” might be referring to just based on your familiarity with their story, and come to think of it that’s part of the brilliance of Telling Lies and simultaneously the source of its ever-present tension. You shouldn’t know the things you do about these people.

A lot of the videos you dig up are incomplete pieces of a whole, lacking all of the information you need to construct a full context for the dialog. This is where the fun lies, digging through these fragments for subtle hints and clues, typing them into the search bar and hoping it returns something valuable. When you finally piece together all the parts of a conversation, you experience a true ‘eureka’ moment where all the puzzle parts finally fit. The sense of discovery in Telling Lies is immensely satisfying.

It bears repeating: the acting in Telling Lies is spot-on brilliant. Telling Lies is dependent on you being able to sniff out hints of falsehoods, and a game like this lives or dies on the quality of its actors’ performances. Unlike in L.A. Noire, it’s never blatantly obvious who’s lying and who isn’t. Again, it’s the familiarity and knowledge you gain about these characters over several hours of watching them in their most private moments that give you this ability to detect the untruths and inconsistencies in their stories. And despite having a single, unchanging conclusion, the journey to get there is never the same for two people. You might uncover videos in a different order than another player, for instance, or you might miss out on some clues. 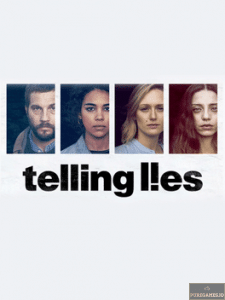 Tellign Lies is a fine addition to a growing library of modern FMV action-adventure games. The cast deliver fantastic performances which give the hours of footage you watch a notable authenticity and believability and perfectly sells the premise.