There’s Howard the Duck and Bebop from the Teenage Mutant Ninja Turtles.

Mutant Year Zero: Road to Eden is a turn-based tactical game that looks and plays like no other. Much like the human-animal creatures that make up its eclectic cast of characters, Mutant Year Zero’s gameplay is a hybrid in its own right. It’s a masterful mashing of real-time stealth mechanics evocative of the Hitman series and the turn-based action of a game like XCOM. And though its two halves aren’t equal – the real-time phase before combat is easily the more rewarding – they come together nicely to form the foundations of an excellent tactical RPG experience.

It helps that the universe of Mutant Year Zero is so enticing. The game is based on the pen-and-paper RPG with a setting that’s both familiar and refreshingly novel (conveniently, this describes pretty much everything about it). As many games are,  Mutant Year Zero is set in a post-apocalyptic future some uncountable years after a world-ending nuclear war brought the fall of human society. Nearly all life on Earth has been affected by radioactive fallout, but though most humans been transformed into mindless zombies, there are some that have been affected differently – like the big talking duck leading your party and his oinky partner, Bormin.

For all its ridiculous character design and presentation, Mutant Year Zero is a grim, grim game. The plot is sparse and ultimately unimportant, but it’s through the animations, dialog, and set design that Mutant Year Zero establishes its lore. It’s quick to remind you that this world and the survivors that roam it are in ruins. Some of the cast would love nothing more than to find out where they came from. Why is he a pig-man and the other guy a walking duck? How many others are like them? It sounds strange to empathize with the existential crises of a walking animal-person, but this is what Mutant Year Zero does to people.

Combat is split into two phases. The first stage is played in an over-the-should third-person angle.

Gameplay is broken up into two distinct phases which we like to call the “Preparation” and “Combat” phases. The Preparation Phase is everything that happens before you fire your first shot. This phase plays out in real-time; you can switch between the characters in your party, moving them through the map to best position them for combat. This phase lasts as long as the enemy remains unaware of your presence, so, with careful positioning, you can use your silent pistol to reduce enemy numbers before combat begins.

We love this part of each mission; the quiet moments before a fight are exhilarating and intense. There’s no better feeling than watching a map full of frightening ghoul-like creatures slowly clear out as you twist and weave your way through shadows and from cover to cover, setting up your squad members killer shot after killer shot. There’s a real sense of accomplishment for a successful Preparation Phase, a nearly tangible lifting of a weight from your shoulders, because if you mess up – and you will mess up – you enter the Combat Phase.

The Combat Phase is harsh and unforgiving. If you screw up a shot, take the wrong route, or fail to kill an enemy with a single bullet, the game enters the turn-based Combat Phase, replacing the real-time stealth gameplay with a traditional, turn-based tactical game mode. The controls and general interface are largely identical to those XCOM, with one clear distinguisher: the combat in Mutant Year Zero is hard, almost to the point of being unfair. Unless you eat Impossible Iron Man runs for breakfast, you might want to stick with the easiest game mode in Mutant Year Zero. Even the tank-like Bormin (see: Boar Man) can only take three hits before he bites the dust, so any mistakes in the Preparation Phase will come to bite you in the ass during combat.

Fans of XCOM should be in their element during Mutant Year Zero’s turn-based combat phase.

Unfortunately, the Preparation Phase is disproportionately important to the success of any mission, so we found ourselves reloading saves over and over before Combat even began. The punishing difficulty was ultimately constrictive, encouraging safe play over experimentation. There’s only one “best” way of completing every mission – save and load frequently to get the best Preparation Phase you can or pay for it by getting a Combat Phase that’s impossible to beat. There are shockingly few ways to actually salvage a poor Combat setup.

There’s surprising little variety to be found in Mutant Year Zero. There’s only a few enemy types, not very many weapon options, and you only ever have at most five playable characters to choose from, and each only has two abilities. It’s fortunate, then, that the gameplay is so compelling, thanks in large part to the excellent level design. You’re thrust into different scenarios and rarely are two alike. 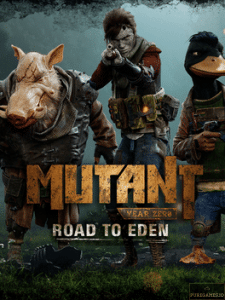 Mutant Year Zero is a bit of a freakshow; it combines real-time and turn-based elements to create a tactical RPG experience all its own. It's a difficult game, often to the point of feeling unfair, but though its harsh difficulty may discourage some creativity with regards to how you approach each mission, success is rewarding nonetheless. This is a recipe of mixed game modes we expect to see more of in the future.