Metro Exodus boldly takes the series out of dark tunnels and out into the brightness of the surface world and the experiment pays off.

Metro Exodus takes Artyom and pals on an epic journey across the surface world.

Metro Exodus continues where Metro: Last Light last left off. The world has been destroyed by war, you are Artyom, a young soldier who has lived his life in the Moscow Metro his whole life. The Metro is where mankind’s last survivors fled to in their panic to get away from the fallout of the nuclear war. Artyom, accompanied by his wife Anna and his loyal soldiers, the Spartan Order, has decided to venture out of the Metro for the first time with hopes of finding more survivors outside.

Right from the start, you’re sold on Artyom’s quest. Previous games have made it clear that there are no survivors outside of the Metro. What little time you’ve spent on the surface in Metro and Last Light have shown the outside world to be a lonely, frightful, radioactive place where live horrible mutant creatures. You never encounter more than the clothing or broken equipment of other humans, their bodies picked to the bone by the denizens of the contaminated tundra.

Metro has always stood out as a series with a fantastic visual direction supported by cutting-edge graphics technology. Metro Exodus replaces the dripping, dank, almost cavernous tunnels of the Metro for a variety of different settings and environments as your journey takes you across Russia and Europe. The attention to detail is stellar – again, quite typical of a Metro game – and the characters are brought to life by some wonderful voice and motion capture performances.

We see the surface world in a new light in Metro Exodus.

Much more than in previous titles, Metro Exodus focuses on exploration. This is natural considering its open-world nature, and it’s refreshing to see a bit more color in the world of Metro. However, the transition from the corridor-shooter, linear gameplay of previous installments to this freer, less-directed approach has a few hiccups.

The maps are enormous, with tons of different pathways and hidden locations to discover, and there’s almost always more than one way to go about completing a mission. There’s near-absolute freedom in the map design, and it’s a joy to go about the world seeking out new routes to a destination – for the first few hours, at least.

Eventually, you discover that, despite its considerable beauty, the world doesn’t contain much at all that’s worth interacting with. For example, you might spend 5 minutes going down a side path, seeing some interesting, mildly-beautiful sights along the way, only to arrive at a dead end. It’s a game that allows for exploration but doesn’t reward it, making it altogether pointless in the end.

Fortunately, the gunplay is better than ever. Weapons have more weight to them and they’re animated beautifully. The sound design – another forte of the development team – is now even better than before, with properly realistic thuds and splats and bullet shots helping to immerse you in the universe. There’s much more diversity in weapon types and now individual weapons can be upgraded. The crafting system lets you create special attachments that work on nearly all of your weapons, allowing for some truly Frankensteinian creations.

Another great change is the removal of the bullet currency system. It was an interesting concept; in an underground kraterocracy where might makes right, it would only make sense that a tool that deals death would also be its most fundamental form of money. The trouble is, when bullets and currency are linked in a zero-sum system like this, it creates a very limiting system that too strongly dictates how you’re meant to play. With the crafting system in its stead, there’s infinite freedom to determine how you want to go about solving the challenges before you. 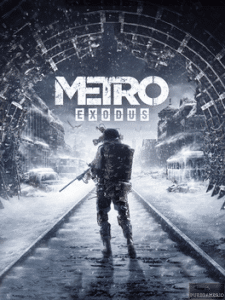 You know this is going to go in a completely different direction from the moment you first step out into the daylight in Metro Exodus. The new open-world is beautiful, if lacking a bit substance, and the combat is better than it's ever been. The cast of characters is a delight and it's fun to take a few moments to speak with them and learn a bit more about them. The new crafting system is loads of fun to experiment with. 4A Games has gone ahead and made one of the greatest single-player shooters in recent memory; do yourself a favor and give this one a spin.