A Way Out offers innovative gameplay and a thrilling tale of two friends on the adventure of their lives.

The story of A Way Out is set in 1972 began in a prison where Vincent Moretti was sent to prison for murder. There Vincent meets Leo Caruso who’s serving a life sentence grand theft auto and armed robbery.

Gameplay from A Way Out is one of the best things in this game besides the storyline. You will play not only as 1 but 2 people at a time. And this requires 2 people because this split-screen system requires you to play 2 players at once like a classic arcade game.

Cooperation and cohesiveness are the most important thing in this game.For example, when incent and Leo try to climb a wall, you must be able to press the button simultaneously and at the right time so that they can climb the wall. Or when they want to catch fish, Vincent makes the fish swim to Leo’s side so he can spear the fish. And certainly, there will be lots of mechanisms like this in the game A Way Out.

These two clash and they clash often.

The best part of the split-screen system adopted by the game A Way Out is that when the cutscene is in progress one of the players can do something else. The camera system will move from split-screen to fullscreen and vice versa, or where the camera becomes the focus of one player and then switches focus to another player, and this game A Way Out makes the camera move very smoothly without reducing the excitement of playing this game.

There will be lots of cutscene in the game A Way Out, even most of this game will broadcast cutscene, which of course in this cutscene one player can still move freely and do something so it doesn’t feel boring.

Some choices will also determine how we deal with certain situations. We will choose between 2 choices, using the Leo method or using the Vincent method and certainly, each choice will have an impact on the game. The characters, Leo and Vincent, are both polar opposites. Each has their own ideas and methods for solving problems.

Leo with his emotions that are less stable and prefers violence to solve problems while Vincent might prefer to use his reasoning in dealing with problems. You might want to choose between Leo and Vincent one of them, according to your original character. Way Out Have a lot of minigames that you can play of course to reduce boredom where a lot of cutscenes that occur during playing the game. But calmly this A Way Out game also has a lot of shooting action, chases, and lots of funny scenes that will make you feel tense and laugh during the game.

The split-screen gameplay is innovative and fun.

Even though this A Way Out graphic can be said to be not too detailed like an action game, in general, you can still enjoy the atmosphere of the 70s. Maybe because this game is more focused on unique gameplay and its very exciting story. Voice actor becomes very important in this A Way Out game, where Game A Way Out displays many dialogue cutscene between Vincent and Leo. Hazelight Studios successfully brought these 2 main characters very lively as evidenced by the characters Vincent and Leo were nominated as fans’ favorite characters.

Very fun, very deep story, 2 different characters with unique gameplay that is not found in any game, A Way Out. You will feel the sensation when playing this game, although some things must be fixed, such as some enemies who are very difficult to defeat even though they have been shot many times. You will not want to visit the adventures of Leo and Vincent very much. 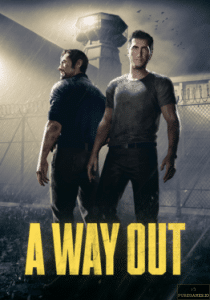 A Way Out tells a very fun, very deep story about two unique individuals with innovative gameplay that is not found in any game, A Way Out. You will feel the sensation when playing this game, although some things must be fixed, such as some enemies who are very difficult to defeat even though they have been shot many times. You will not want to visit the adventures of Leo and Vincent very much.