Ghost Recon Breakpoint isn’t sure what it wants to be.

Ghost Recon Breakpoint is Ghost Recon in name only. There was a time when Ghost Recon was known for its tempered pace and subdued atmosphere. The original game was nothing like the twitch-heavy shooters of its day, carving a niche for itself among fans of a more cerebral experience. Breakpoint, however, is a sloppy messy collection of flavor-of-the-day mechanics inspired or borrowed wholesale from other titles. It’s an action-heavy survival shooter that has eschewed the thoughtful pace of its predecessors in favor of systems that enable absurd interactions and over-the-top scenarios.

In Ghost Recon Breakpoint, you take control of the soldier Nomad, a key member of the Ghosts sent to investigate the tensions in the made-up nation of Auroa. Your helicopter is fired out of the sky by the island nation’s defense system, and you find yourself stranded alone in a foreign nation wrought by political turmoil.

Immediately, Ghost Recon Breakpoint separates itself from the other games in the series. Previous Ghost Recon games were squad-based affairs – Wildlands’ narrative relied heavily on the camraderie between squadmates – but Breakpoint leaves you alone in the middle of a jungle. You’re hunted throughout the game by Walker, the leader of a gang of violent mercenaries known as the “Wolves”, played by Jon Bernthal. Bernthal takes to the role wonderfully, bringing a real sense of danger and malice to the character of Walker, though it isn’t difficult to stand out amongst a cast of dummies with no personality.

Jon Bernthal stands out as Walker, the leader of the Wolves.

Even the story is hopelessly generic, which is a true shame because Auroa is actually interesting – it’s an isolated island where tech giants are at war. Ghost Recon Breakpoint could’ve used the setting as a jumping point for exploring questions about morality and privacy. Instead, we get a boring tale about Nomad and Walker. Luckily, the script and acting keep the narrative moving at a steady pace, and it’s honestly a solid story, but it stands out for its lack of daring amidst the reckless experimentation in all other aspects of the game.

Unfortunately, adding mechanics borrowed from other games doesn’t work. There’s a wide variety of mission types, but sadly little variety in the actual missions. Setting up camps for fast travel and crafting sounds fine on paper, but crafting is underdeveloped and ammunition is easy to get, so they serve little purpose in the end.

Nomad is lost all alone behind enemy lines, but the survival system is depthless and contrived. It doesn’t feel like you’re fighting against all odds to stay alive. It honestly feels like there are no stakes at all. It’s hard to believe that a game that tries so many tricks can’t do any of them right. We have to applaud Ubisoft for finding a way to make it all not work.

Auxiliary mechanics, like Stealth Kills, are poorly implemented and unsatisfying.

When it comes to combat, Ghost Recon Breakpoint can only be described as a cookie-cutter cover shooter. As a whole, there’s nothing here from the combat that sets it apart from your generic cover shooter from the mid-2000s. Indoors combat is somehow worse, with the clumsy controls and awkward camera making navigation a hassle. Not to mention the annoyingly sloppy cover system that often has you ducking for safety behind the wrong wall or object.

Ghost Recon Breakpoint tries to build on the open-world action gameplay of Wildlands, but it’s moved backward in leaps and bounds. Where Wildlands was a flawed but enjoyable merging of a military shooter and the wanton chaos generator, Just Cause, Breakpoint is an expensive laundry list of poorly implemented features. 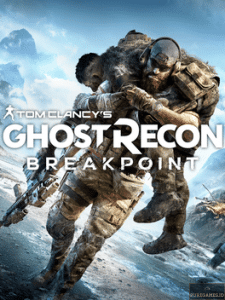 Ghost Recon as a franchise lost its way quite a while ago. Now, it's a Caesar's salad of cool concepts that never fully come together, tossed around with no rhyme or reason. To make matters worse, it's a sub-par shooter beneath all of the superfluous features. We can't recommend it.