Two Point Hospital is absurd and comical but provides a satisfying challenge for strategy fans.

Two Point Hospital is a classic management sim game where you’re put in charge of a series of hospitals, each with problems and challenges more difficult than the last. You’re given free reign of the hospitals. Everything from where the wards and staff offices are placed is determined by you, even down to the types of furniture in each room.

Of course, it wouldn’t be management without a budget to balance, staff disputes to settle, and customers to tend to. Two Point Hospital has all of that and a sense of humor so wacky and off-the-wall we weren’t surprised at all to learn that many of the developers at Two Point Studios were responsible for the similarly zany Theme Hospital series.

Despite its tongue-in-cheek aesthetic, Two Point Hospital knows that managing a hospital is dirty work. Patients get sick, accidents happen all over the floors, and the constant influx of new patients can be overwhelming. That’s not even mentioning the man management side of the job and having to deal with all the moods and personalities of the doctors and medical staff. It may look silly, but Two Point Hospital is a complex, dense management game first and foremost. Even if the endless puns and over-the-top silliness doesn’t appeal to your sense of humor, true sim fans can still find a lot to enjoy from this game.

The humor in Two Point Hospital might not be everyone’s cup of tea but the core management mechanics are rock solid.

As the big boss you have full control of where rooms and equipment are placed.

Following standard sim game rules, you complete levels by fulfilling the requisites of specific challenges – sometimes it’s to do with curing a certain number of patients, or perhaps you’re tasked with collecting a specific amount of money within a given time frame. In keeping with the silly tone, many of the quests are silly affairs, such as discovering a cure for a disease that is turning patients into mimes. Complete the different challenges and you’re rewarded with stars which you need to progress to the next hospital.

As is customary for many sim games, the first hospital essentially serves as a sandbox for you to experiment with the different mechanics and become accustomed to how hiring staff works or the procedure for dealing with patients. The difficulty gradually ramps up as you go along, and things have the tendency to spiral into madness as you attempt to maintain your reputation while catering to the needs of patients with increasingly ridiculous maladies. It’s difficult and punishing but never frustratingly so, perhaps thanks to ceaseless absurdity of it all, and it remains a rewarding game even in failure.

It’s also where the game quickly sets the tone, declaring exactly what kind of game it is with some almost-clever puns and ridiculous animations. The jokes are pretty bad, but they’re so bad you can’t help but laugh, with some downright bad wordplay used to describe the odd diseases afflicting your patients (for instance, “lightheaded” patients have literal light bulbs for heads).

Progression is brisk and rewards are plentiful but hardcore sim fans will appreciate the difficulty of the extra challenges.

Two Point Hospital can get very tough; especially in the later stages.

At the end of each successful project you’re handed the keys to another clinic, private practice, or hospital with issues that need your Midas touch to fix. You’re often faced with choosing between several options for progression and you’re free to bounce back and forth between hospitals at will. You’re free to build rooms and furnish them as you please, though the general structure of each building is set in stone. We would have loved to be given a plot of empty and land and a budget to construct a new medical facility from scratch, but it’s a tiny niggle in an otherwise excellent gaming experience.

Two Point Hospital is certainly a difficult game but one could never say it’s a grindy one. You can certainly return to old hospitals, redoing challenges to earn enough stars to unlock new locations, but the core gameplay loop is entirely based on one’s management skills. For instance, you won’t be able to brute force your way to unlocking another hospital just by replaying earlier stages. 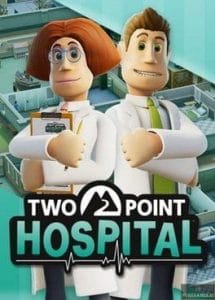 This is a fantastic game that manages to put a humorous twist on the decidedly unfunny business of dealing with the ill. It's craftily designed to constantly reward the player, whether its a comical gag or a brand new toy to play with, but it doesn't sacrifice its integrity as a management sim in the process. For fans of Theme Hospital, this one should be an instant purchase. Fans of sim games in general won't regret giving Two Point Hospital a spin.