This Land Is My Land offers a perspective of the Wild West that’s rarely explored.

In This Land Is My Land, you play a native american chief trying to protect his people from a strange, foreign invader.

Bored with all the generic open-world games that seem to meld into one another? If you are looking for a challenge and unique gaming experience, This Land is My Land should be right up your alley, offering a unique mix of open-world survival gameplay with stealth and crafting into one. The game is in early access still, but our experience in these early stages shows a game full of promise.

If Red Dead Redemption offers dazzling cowboy action, This Land Is My Land is the opposite of the game. You are the chief of a small Native American tribe. Your land is gradually being stolen by foreign invaders and you must do all you can to ensure the continued survival of your people, even if it means going to war with the settlers.

There’s a lot of interesting gameplay features offered by This Land is My Land. Let’s start by with the combat system. Combat in This Land is My Land is primarily stealth-focused. You can kill using a knife or arrow, but you’ll notice you’re outgunned from the start as you’ll be facing cowboys armed with pistols and rifles. This means careful sneaking is key to a successful confrontation, made even easier at night when the enemies have a limited vision.

At the start, with your limited arsenal, you’ll find yourself taking care to avoid unnecessary combat. However, later on, you’ll gain access to a wider variety of weaponry, including the guns used by your foes. Trading is also present in the game; you can trade currency and raw materials for new weapons or ammunition.

There’s a unique Karma system that influences – and is influenced by – how you play. Certain in-game actions affect your Karma level and this can have an impact in key moments throughout the game, resulting in different outcomes from an interaction, tighter enemy patrols, or changing whether a fighter joins you.

You must tame horses before you can ride them.

The crafting system, too, is unique from other open-world games with a similar mechanic. Your fighters can be assigned quests that vary in their usefulness and difficulty. For example, you can send a fighter off in search of a particular pelt you need and task another with building a lookout camp in another location. There’s a refreshing amount of flexibility in how you manage your warriors, and this, in turn, creates an openness in approaching quests.

Even horseriding is unorthodox. Other games either assign you a specific steed or treat all horses identically – you can ride all of them. In This Land Is My Land, you need to tame a horse before you ride it. Animals, too, must be hunted to gain their valuable raw materials.

Like other RPG games, we can also upgrade our skills. Skills are divided into Warrior, Scout, Chief, and Hunter skills. and that skill also becomes a very important skill. For example, in Warrior skills, we can increase stamina, heal levels, increase the ability of some weapons. or even on the Chief’s skill, we can upgrade hunting skills that will be useful for our subordinates to find rare animals. So we can be sure this skill will be very influential and help us during the game.

Even in early access, this game looks drop-dead gorgeous.

This game is still in the early access stage so, naturally, there are still a few bugs. However, the basic concept at offer is one-of-a-kind and you’d be doing a disservice to yourself by missing out. There are still many features that will be implemented into the game starting from robbing trains carrying food using poisons and others, so it will be interesting to see how the game develops over time. 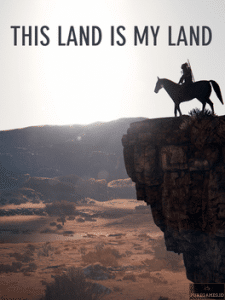 This Land Is My Land takes the standard western and turns it on its head, depicting the Wild West from the perspective of the traditional bad guy. It's full of unique twists on old mechanics and, even in these early stages, is looking like a beautiful game. With more features on the horizon - we can't wait to rob some trains! - this is certainly a game to keep an eye out for.