John Wick Hex successfully translates the intense action of the films into a terrific series of time puzzles.

Thrilling tactical action that does the John Wick name justice.

Promotional trailers for John Wick Hex gave the impression that this would be another Hotline Miami clone. You couldn’t fault the developers even if that was the direction they went with; the visceral, high-paced action of Hotline would be fitting for a game based on the Wick films. It’s not that, though. John Wick Hex is much more cerebral, choosing instead to translate Wick’s gunplay antics into a series of time-limited decisions. Its stop-and-go gameplay isn’t quite John Wick, but the fantastic tactical gameplay makes it a great game on its own.

John Wick Hex is more Super Hot than Super Smash TV, but it also incorporates the freedom of action found in Heat Signature. Time only moves when you move, and the result is a game of short, intense action spaced by long moments of quiet thinking. This isn’t the balls-to-the-wall action shooter that the trailers had us believing it would be. It’s a game of maximizing rewards and minimizing risks and staying alive through careful, planned strategy. It’s also not quite Wickian in concept; in the films, John Wick’s movements seem to naturally flow from him, a violent stream of consciousness. His deadliness is instinctual rather than calculated, and this style of gameplay isn’t particularly fitting for his free-flowing violence.

John Wick Hex, in contrast, is a game that thrives in the moments between the action. You can see who will act and when by looking at the timeline at the top of the screen, and this knowledge is vital for successfully getting through stages. The time cost of your actions is also visible to you. So you’re faced with a vital choice at nearly every turn – do I shoot this guy at the risk of walking into his friend’s line of fire? Do I risk throwing my gun at the guy behind me, or do I roll into cover?

To add to the tension, there’s also a random element to every action taken. It’s a stream of risk-reward choice making that keeps the game exciting even with all the starts and stops that are an an inherent to the game’s core mechanic.

Knowing to read the timebar is key to completing stages.

To keep the game challenging even with the extreme leniency you have with time, John Wick Hex carries your health, ammunition, and bandages over to the next stage. Sure, you can play with reckless abandon, forcing your way through entire squads of soldiers, but that’s likely to set you up for failure in the next stage. It’s yet another tactical layer, something else to consider as you make your way through the challenges.

Replaying stages is a major part of John Wick Hex, but you can never reset the items you start the level with. The fact that the game preserves your vitals into the next level promotes a mindset for efficiency – you’ll want to redo runs, even successful ones, because you’re certain you could’ve done much better. It’s in promoting repeated attempts at perfection that the John Wick Hex truly manages to shine. You’re only ever competing against yourself, and a great run only sets you up for a better start later on.

There’s so much you can do at any given moment, the sheer choice can often be mind-boggling, but it’s in this variety that the player finds freedom. A single mistake can ruin an otherwise fantastic run, but it also offers a valuable lesson for future success. The ability to upgrade perks or equipment is secondary, it’s tactical pragmatism, careful positioning, and a lot of learning from failures that ultimately wins the day. 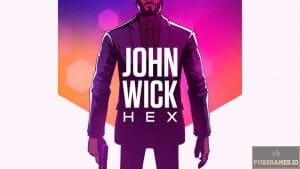 We're not sure how faithful it is to John Wick's free-flowing shooting action, but it's an excellent game regardless. Fans of games like Heat Signature or even a classic tactical RPG like Shadowrun will enjoy this one immensely.